The U.S. Treasury Department in April announced 44 “opportunity zones” in Nebraska. The Nebraska areas were among hundreds approved in 15 states.

One of them includes all of Ord and a fair share of Valley County.

The zones encompass census tracts that are considered economically disadvantaged and were created as part of the Tax Cuts and Jobs Act that was passed last year.

Businesses and individuals that invest in the opportunity zones can qualify for federal tax breaks.

Nebraska Gov. Pete Ricketts said in a news release that the zones are spread out over 20 cities and towns in the state. 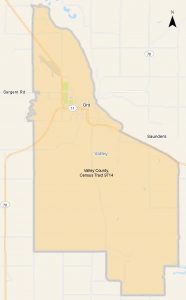 “Thanks to the Tax Cuts and Jobs Act, 20 communities across Nebraska now have another tool to help attract new investment and job opportunities,” said Governor Ricketts. “This announcement builds on the positive news we’ve seen from companies from Nelnet to Wal-Mart, who are reinvesting their tax cuts into their workforce through higher wages and bonuses. None of this would have been possible without the great work of Nebraska’s federal delegation, which unanimously supported the tax relief bill.”

The Tax Cuts and Jobs Act authorized the governor of each U.S. state and territory to nominate a certain number of qualifying census tracts as “Opportunity Zones.” Nebraska’s designations were officially confirmed by the Treasury Department, which administers the program.

Investments made through certified investment vehicles created as “Opportunity Funds” are used to spur economic growth in designated zones. Parties who invest in Opportunity Funds can benefit from tax incentives, such as deferrals on capital gains tax.

“We would like to thank our federal delegation for their work in passing the Tax Cuts and Jobs Act, which made the opportunity zones program a reality,” said Nebraska Department of Economic Development Director Dave Rippe. “We’re eager to begin working with our communities to harness this program to its full potential to grow Nebraska.”

Valley County Economic Development Director Trevor Lee submitted Valley County’s proposal on behalf of the City of Ord. “We are grateful for Gov. Ricketts acceptance of Ord’s proposal and for the opportunity the program presents” said Lee. “Valley County is already a very attractive place to invest as demonstrated by the millions of dollars that have been privately invested in recent years. The Federal Opportunity Zone Program provides an additional tool in our economic development toolbox that makes our area even more attractive for private investment that can spur additional economic activity and growth”.